Okay. Now that we got that out of the way. Let me tell you why there is no such thing as a “mini” Goldendoodle. It’s very basic really, to understand why a hybrid can’t fall into a size category like purebred dogs. Yes of course there are plenty of breeders out there who will boast they create miniature-sized Goldendoodles simply because one of the parents is a miniature sized Poodle…but I’m afraid they aren’t filling you in on the important details that come after that statement.

You see, purebred dogs have been refined to the point (after so many decades of breeding and mixing) that you can almost be guaranteed offspring size by knowing the size of their parents and their grandparents, cousins, and ancestors down throughout their lineage. With Goldendoodles or any other hybrid dog, it does not matter what size the parental dogs are.

Most of the time, the offspring are going to be different sizes including even being smaller or larger than either parent dog. Even if a Miniature Poodle is bred to a Golden Retriever, you have to take into account the Golden Retriever’s size and its lineage of fairly good-sized ancestors. That isn’t to say Goldendoodles don’t come in very small sizes, because they do! I own one who is just 7 pounds and she’s several years old.

But Goldendoodles can not and do not fall into specific size categories simply because the entire lineage will not be the same exact size, nor do they come from “miniature” sized ancestors. Over the years, I have seen that the offspring stay relatively closer in size to each other (not to the parents) if a Goldendoodle is bred to either a Poodle, Golden Retriever, or another Goldendoodle. When a Golden Retriever is bred to a Poodle, regardless of the size of the Poodle, the offspring are going to vary widely in size, in any given litter and that’s a fact.

While a Goldendoodle breeder may say they create “Miniature Goldendoodles”, just ask them to give you a “size guarantee” and watch how fast they sway you away from that subject. They’ll mumble something about how they can’t possibly give you a size guarantee but they are pretty sure their puppies will stay small because their Poodle parent was either a Toy Poodle or a Miniature Poodle.

You may be one of the lucky buyers to get the smallest puppy in the litter but I guarantee that not every puppy born out of a litter where one of the parents was a Toy Poodle or a Miniature Poodle, will stay small.

The miniature size dog in general has a big attitude. They seem to have a gigantic personality. They can be destructive in big ways; they can chew a toy like a big dog and they certainly don’t mind defending their territory like a big dog. The Goldendoodle, regardless of size, seems always poised for action. They’re fast, quick on their feet, and quite silly at times as they bunny hop around the yard, field, or house.

A Goldendoodle 25 pounds or under must live indoors. There’s just no doubt about it that they would not be suitable as an outdoor dog on a full-time basis. Being small in stature does not at all mean they are delicate. But a Goldendoodle under 25 pounds is not suitable for small children. This is simply my own personal opinion and I am sure some will disagree with me. In my 14 years of being a breeder, I’ve only seen a small handful of miniature-sized dogs work out for those who have small children.

My research since 1999 has proven one hundred percent that nearly 90 percent of what you read on the internet about the Goldendoodle dog whether in a book or on the internet from others, is completely trumped-up crap. Where these brainiacs come up with half of what I’ve seen written or posted, is beyond me.

Neither of the offspring worked out for families with small children. Two of the pups from my 2005 litter had to be rehomed. I still own two of the small Goldendoodles from my 2007 litter, not being able to place them because now that they are older, they don’t want anything at all to do with strangers. They are great around me, but they have no desire to meet anyone or play with anyone else.

Because I was very dismayed at the poor temperament quality, I elected to never again create a Goldendoodle that small again. To each his own if other breeders are continuing to create the doodle dog like this. I’m a Golden Retriever fan and I enjoy the Golden Retriever personality. I do not like the personalities of very small dogs. I like team players, not those who want to go out on their own, solo.

Never underestimate the power of the miniature dog. Their bite can be certainly worse than their bark and it's very possible a very small, quirky Goldendoodle can turn out to be a biter. They need very little exercise because they don’t require a lot of room, but they may run up to someone coming inside of your home after you’ve let them in and snip at their leg or they may run and look for the nearest piece of furniture to go hide under. The energy level of course is going to be very different in a much smaller Goldendoodle than the larger Goldendoodle.

Goldendoodles, as a whole, can not be lumped in with each other only because so many breeders are creating them in various ways. I’ve seen some breeders advertise they are selling second, third, fourth generation doodles and the list of reasons why they are doing this seems to be about as long as the list of the cockamamie “benefits” they are telling potential buyers who seek such a small Goldendoodle.

This wonderful hybrid has a much better temperament when they are at least no smaller than 25 pounds as an adult if you have small children and want a sociable family pet. Any smaller, you are taking the chance of owning a doodle that is very unsocial with your friends and neighbors, including your own kids. The little fluff ball may be your perfect companion, but don’t expect them to shower the same love and affection with others. They tend to be a one-owner doodle.

True, a very small Goldendoodle can be transformed to become everybody’s friend….but with a lot of extra effort on your part and possibly a professional trainer’s part.

With Goldendoodles 25 pounds and above, you will more than likely have a family pet who is stranger friendly and eager to come at you with dirt flying, everyone laughing and a doodle eager to be your muse. They will spin around, bunny hop around, jump around, and basically keep you laughing at their antics.

One person had contacted me about a Goldendoodle saying she was seeking a Goldendoodle who was the “most hypoallergenic and least shedding”. That is never going to happen. It doesn’t really matter how much Poodle the Goldendoodle has within its DNA structure. It will still be a low Allergan, low shedding, low dander dog in comparison to other types of dogs.

Goldendoodles who have a smooth coat will shed a bit more than the curly coat or the shaggy coat, but the smooth coat no matter what size it is is still considered to be low dander, low Allergan, low shedding dog if you want to compare the shedding to a purebred Golden Retriever. I’ve personally never witnessed any less or more shedding between the curly coat and the shaggy coat Goldendoodle, regardless of size or gender, but some people will swear they see a difference.

I think they see a difference only because they want to see the difference. As a breeder who grooms my own Goldendoodles in the same exact way, I don’t see any difference of hairs coming out one way or the other when I am using a force dryer to blow dry their hairs. And yes, I did say Hairs. Goldendoodles do not have fur. Nor do they have a wool coat, fleece coat, or any other silly type of coat. Regardless of how they are created, 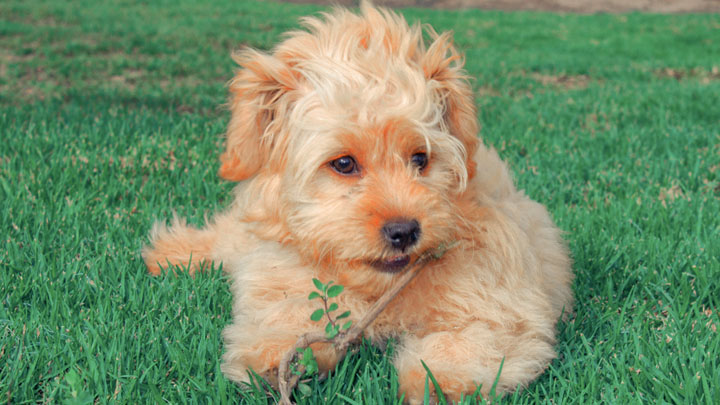 A Goldendoodle Only Has Three Coat Types

Poodles were famous for performing in the circus as early as the 1700s. Nothing fuels a Goldendoodle’s desire to entertain their families and friends than having an appreciative audience. But a very small Goldendoodle may only want to entertain its owner, solo. They don’t have a tendency or desire to be the center of attention with a large audience or crowd.

Their comfortable being in your lap and showering only you, with love and attention. Now that the American Kennel Club has hopped on the doodle bandwagon, perhaps one day they will allow this beautiful dog who loves to entertain, into the show ring. Those who enjoy training their doodles to do tricks would have a ball inside a ring.

I Can Take Them

Maybe with early socialization around lots of strangers, a Goldendoodle under 25 pounds as an adult could work out for families who have small children. Professional training, obedience classes, and lots of exposure to strangers is vital if you must have such a small dog around your very small children. Miniature and Toy Poodles are known to be very vocal dogs. For some reason, the very small Goldendoodle picks up this trait in an exaggerated and undesirable way. 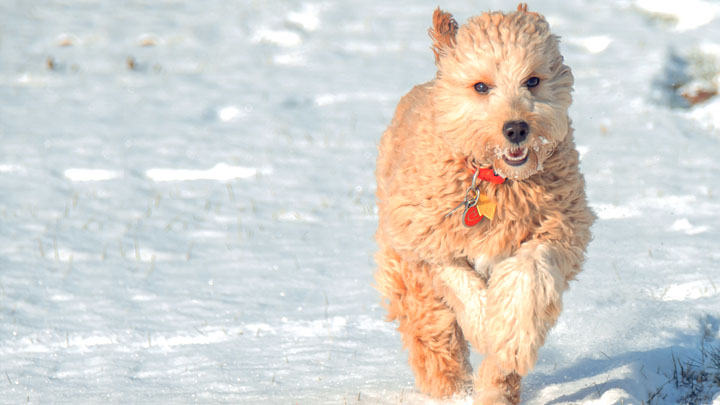 Not always, but many times. Again, this article is not singling out the small Goldendoodle as a whole. This article only discusses what I have personally experienced and is meant to help you, the potential buyer, to understand that this can happen and might happen regardless of what breeder you purchase from. I personally recommend a Goldendoodle 25 pounds or larger if you, the potential buyer, have small children and you seeking a pet who is going to be interactive with everyone. But, to each his own.

Toy and Miniature Poodles, as a whole, can be somewhat aggressive in an exaggerated way. Maybe it’s that little dog, a gigantic personality trait. Not sure. As far as the Miniature Goldendoodle is concerned, it’s possible they can be more aggressive than those who are larger. With a very small Goldendoodle, it seems the larger their target, the better.

They have no problem flying off your porch to take charge, not having any common sense to know that a larger dog can cause great injury to them. Again, that’s the gigantic personality showing through. Sometimes it is impossible to even put two small Goldendoodles together without a scuffle happening.

This isn’t a gender issue. This is a size issue. I see it with small females too. Sometimes the aggression with small doodles is so much that they may have a tendency to urinate on every toy they own just to prevent other dogs from having at them.

But you don’t want this if you have small children. A small child coming up to hug his mommy or daddy could be construed as a need to protect and your small Goldendoodle may nip your child to “defend” you. They may be convinced your child is coming toward you to cause harm or injury.

Whichever size Goldendoodle you decide upon, just know that the curly coat and shaggy coat has significant grooming needs. Even though your small Goldendoodle acts like a big dog who was sent through a shrinking machine, the Goldendoodle as a whole is a wonderful hybrid. Their accepting audience is about as wide as their size variances! 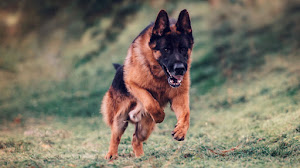