Ever since the hawk-headed Parrot was exhibited in England, in 1856, this fascinating bird has been highly desired, both as a pet and as an aviary 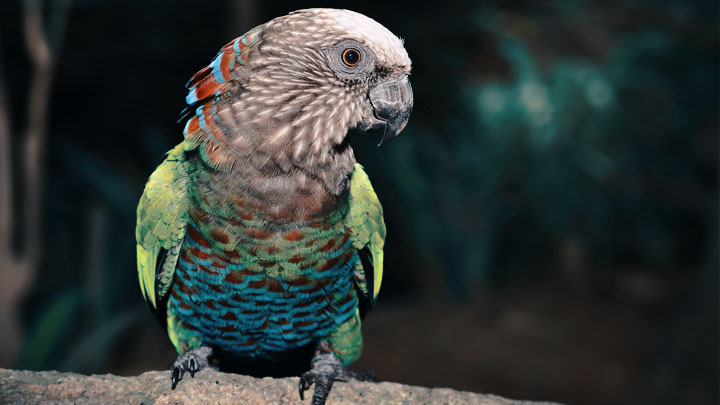 Ever since the hawk-headed Parrot was exhibited in England, in 1856, this fascinating bird has been highly desired, both as a pet and as an aviary bird.

The most intriguing characteristic of this bird is the elongated feather on its nape. When raised, these feathers form a beautiful, erectile ruff. In South America, Hawk-headed is known as red fan parrots, and indeed, each deep crimson crest feather is broadly barred at the tip in brilliant blue, creating a colorful fan when raised.

The scalloping in the Hawk-headed headdress, though color, is similar to that on the crest feathers of many hawks, hence the name. The beautiful headdress reminds me of the ceremonial headdresses of some American Indians. Even the generic name of this bird "Deroptyus," refers to the crest.

The Hawk-headed Parrot usually keeps its crest down, raising it only when threatened. Some people claim that before a change in the weather, this will lift its crest feathers as it sings. I do not believe Hawk-headed displays their crest feathers during courtship, although no one knows for sure.

The Hawk-headed crest is unlike the crest of any other parrot or cockatoo. It looks alarming when raised suddenly, and Hawk-headed in the wild probably erect their crests to frighten predators or any competition species. Its head doubles or even triples in size and this can be very intimidating. 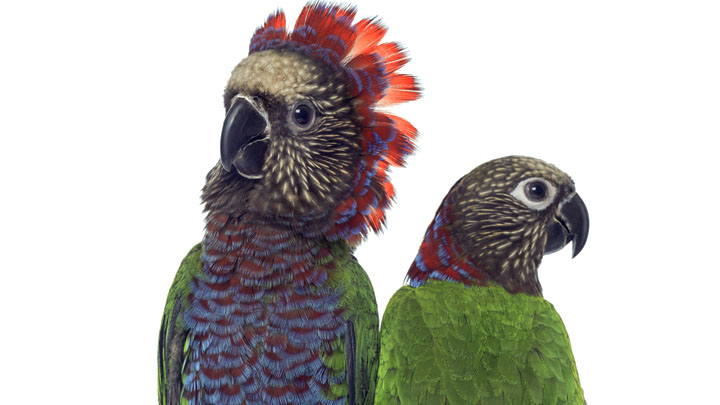 There are two subspecies of the Hawk Headed Parrot. The buff-crowned (often referred to as Buff-headed) Hawk-headed is the smaller race, and it has whitish streaked feathers on the tops and sides of its head. Its forehead is dusty white. this is the nominated race.

and is the race most often wean in captivity. The Brazilian Hawk-headed, "D. a. fuscifrons", has a much darker crown than does the Buff-crowned, and its colors are brighter.

The Brazilian Hawk-headed is scarce in captivity because Brazil has banned the exportation of its wildlife, and this ban is unlikely to ever be lifted. Some Brazilians have been imported in the past, however, because they are so similar to the buff crowns that many importers in the 1980's and/or customs officials failed to notice the difference.

Buff-crowed Hawk-headed has been imported into the U.S prior to the enactment of the Wild Bird Conservation Act (WBCA) of 1992, but they have never arrived in large numbers, so they remain expensive. Because of their rarity, Brazilian Hawk-headed command even higher prices than do Buff Crowns.

Now in the latter 1990s, the Brazilian race seemed to have stalled in its production as there are almost no non-related wild-caught or captive-bred birds available to keep the gene pool strong.

DISTRIBUTION IN THE WILD

The Hawk Headed Parrot is found in Colombia, Ecuador, Peru, Venezuela Guyana, and the extreme northwest portion of the Brazilian Amazon River basin. Here the nominate race, "accipitrinus." occurs north of the Amazon, and the "fuscifrons" live south of the Amazon.

Although distributed throughout a large portion of South America, Hawk-headed does not dwell in large groups, preferring to live in pairs or in small groups. As with almost all parrots, Hawk-headed will nest in cavities or holes found in trees. In contrast to many other parrots, however, they also roost in tree hollows at night. Most other parrots will find a sheltered tree limb to roost on when they sleep.

In the wild, Hawk-headed eats mostly fruit, especially that of the palm tree. They also enjoy berries and nuts. 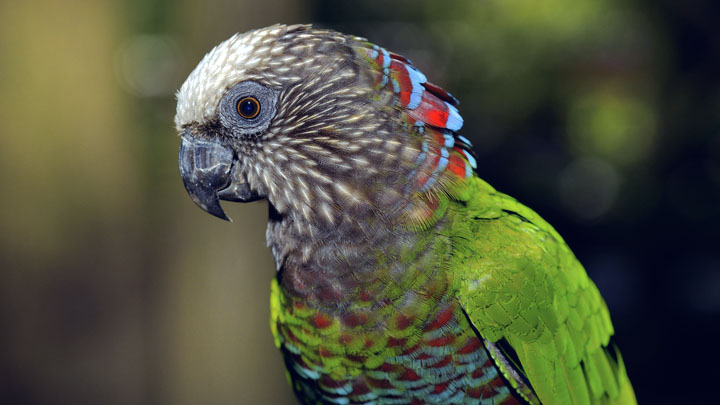 Convincing Hawk-headed to eat a variety of food is extremely difficult. Wild-caught Hawk-headed will often eat only fruit and dry seeds, sometimes narrowing their choice to only one type of food. Such behavior will prevent a bird from eating a nutritionally complete diet.

But even the most stubborn bird will respond to patience on its keepers part. Offer large amounts of a wide variety of fruits and vegetables to approximate the extensive selection available to Hawk-headed in the wild. It may take a long time to get wild-caught individuals to sample different domestic foods, even fruits, and vegetables. You may have to feed dry seeds only in the late evening to force the birds to consume other foods during the day.

Choose dry seed mixtures that include parakeet and finch-type seeds, such as millet and canary seed. You should either omit sunflower and safflower seeds from a Hawk Headed diet or feed these seeds sparingly. If offered the choice, many Hawk Headed will eat only these seeds, excluding all other foods. Domestic Hawk Headed is much easier to feed a varied diet compared to the wild-caught ones.

Because many Hawk Headed are not consistently reliable parents, breeders often either remove eggs for artificial incubation or remove the babies early for hand feeding. Young hand-fed Hawk Headed make engaging pets. their charming personalities equal their beauty. They are intelligent, affectionate and playful, and some even "talk" well.

I have heard owners of pet Hawk Headed describe their birds as amusing, companionable, sociable, quick-witted, and "everything one could wish for in a pet." One source cites a Hawk Headed that recognized all regular visitors to its home and called each person by his or her correct name - quite a recommendation for such a beautiful bird.

I remember being charmed by the personality of a hand-fed Hawk Headed that was on the show bench of an exotic bird show I was judging. The bird sat on an open perch and was attentive to all those who passed by. His beautiful crest was almost continuously erect because he received so much attention. I think he loved the people around him so much that the bird gave the public even more attention than he received!

Hawk Headed has been bred successfully in both cages and flights. The floor of a flight may be more accessible to the birds, but Hawk Headed does not like to forage on the ground as much as Australian cockatoos and parakeets do, so such a setup has no real advantages unless it is very large.

Hawk Headed do not reproduce in captivity readily, but when a pair does go to nest, they may breed continually from then on (unless a major change takes place, such as a move to new quarters or an injury). Many breeders used to believe that pairs should be kept as far apart as possible so they would not disturb each other. This may be true in some, but not all cases.

Ramon Noegel and Greg Moss of Seffner, Florida, had a wonderful pair of Hawk Headed that reproduced repeatedly for many years. When a new pair of Hawk Headed was placed nearby, however, the female of the breeding pair got so disturbed that her next clutch of eggs was infertile. The breeders relocated the new pair of birds, and the original pair resumed reproduction.

I have seen three pairs of Hawk Headed side by side in flights where only the center pair reproduced continuously. The fact that solid partitions divided the pairs may have affected this pair's breeding success.

Certainly, captive-reared Hawk Headed pairs will reproduce better in close proximity than would wild-caught pairs. Although it is relatively unusual, I know of several pairs that rear their own chicks. These youngsters should be held back for future breeding stock. Parent-reared birds may not be tame, but they will reproduce in captivity.

Hand-fed Hawk Headed can also be used as breeders. Those birds that are handled as little as possible and reared with other young Hawk Headed (or at least other young psittacines) in the same rearing tub and cage will reproduce in captivity. Hawk Headed that have been hand-reared in isolated conditions and made into pets probably will not make good breeders. They will, however, make splendid pets.

If the male bird of a pair was hand-fed, the pair probably would not reproduce well A hand-fed male will often bond with his human aviculturists or owner rather than its mate, and infertile eggs may result.

If the female of a pair has been hand-fed and the male is wild-caught, the pair will have a good chance to reproduce as long as there is good compatibility. It is best, of course, if both potential parents were well-socialized hand-feds or parent-reared.

Most breeders supply their Hawk Headed with vertical nest boxes. the standard size is 12 inches square by 24 to 30 inches in depth. Breeders now use narrower 10-inch square nest boxes of similar heights with great success. It is surprising how small Hawk Headed really are, much smaller than most Amazons.

Other types of nest boxes used include boot-shaped and slanted boxes. I have given one of my wild-caught Hawk Headed a long, narrow natural log, which they seemed to enjoy using as a nest box. They chose it over a square wooden nest box. Whether your Hawk Headed are breeding or not, always have a nest box available, because these birds roost in them at night.

Normally Hawk Headed lay two eggs but often rear only one chick. Hawk Headed may lay two to three clutches in the same breeding season. These birds can become extremely aggressive during nesting time, and they may attack a human who enters their territory. The mate will fan its tail, raise his crest and sway back and forth on the porch in a show of protective behavior. He may also hiss at an intruder. this is quite a display.

I had a pair of Hawk Headed housed next to a Blue-headed Pionus. One breeding season, the Hawk Headed male continuously was interested in the Pionus pair even to the point of being in the front of the cage away from his mate trying to engage the male Pionus. This pair of Hawk-headed were continuously sided by side and this behavior was so unusual.

It then occurred to me that the Blue-headed Pionus had the same colors as did the Hawk-headed and that this might be why the Hawk-headed male showed so much interest and aggression to the Pionus. Immediately after putting a solid partition between the Hawk-headed pair and the Pionus pair, this reaction completely disappeared and the male Hawk-headed went back to perching by his mate's side.

Because a female can come off the nest to join her mate during incubation time, avoid disturbing a nesting pair. Feed and water them by using outside-access dishes, especially during nesting time. Probably the first successful captive breeding of Hawk-headed occurred in 1965 at the Brookfield Zoo in Chicago, Illinois.

The Hawk-headed is certainly one of the most exotic of the South American parrots, and we must be mindful of our responsibility to do our best to establish this parrot in captivity so that future aviculturists and pet owners can enjoy this wonderful bird for generations to come.