Amazon Parrot is One of the Most Independent Birds

Amazon Parro is probably one of the most independent of the parrots. They can entertain themselves for hours with the simplest of items or can do the 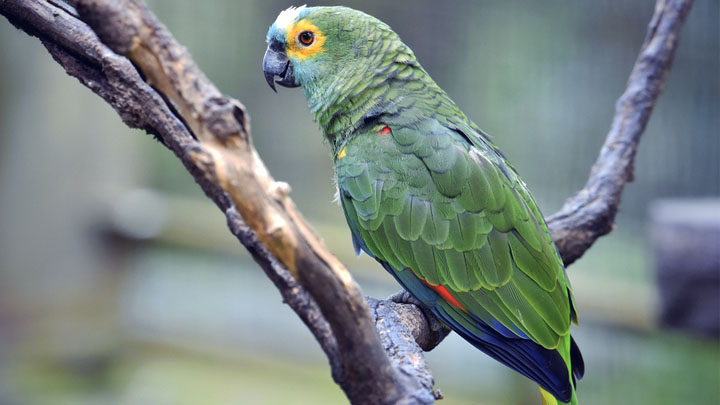 Amazon is probably one of the most independent of the parrots. They can entertain themselves for hours with the simplest of items or can do the perfect imitation of Tarzan from the most complex toy. They will allow you to cuddle them when THEY want to be cuddled but if they are not in the mood, watch out.

When people ask our advice regarding the type of bird to purchase, we describe amazon in general as being playful birds, talkative, independent, colorful and entertaining.

They Feed on Fresh Fruits and Vegetables in their natural habitat and should be fed the same in captivity. They have a tendency to become perch potatoes so limiting seeds and fatty food from their diet is normally a good idea.

As a rule, Amazon parrots come from Northern Mexico through Central America all the way south to South America. There are species of amazon ranging from the 12" White-Fronted to the 16" Imperial. In this article, we will talk about the most commonly available.

All Amazon has a green body with different colored heads and wings. 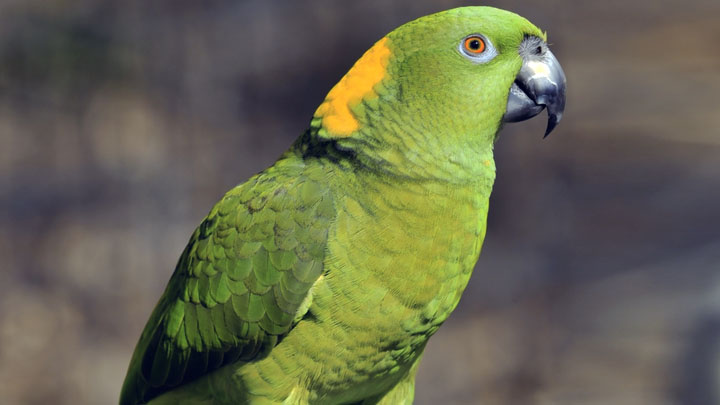 The Yellow Nape Amazon originally came from Southern Mexico through Central America with the most common imports from Honduras. it has a green body, a small patch of red on the bend of the wing, and a Yellow Nape. Some Napes (which they are commonly called) has a patch of yellow on the top of the head. As babies, these birds are totally green.

The first Yellow Nape feather usually appears at the age of 12-24 months and gets increasingly larger with age. Yellow Napes has been considered the best talkers of the amazon usually learning to speak as they wean. They are very playful birds and will keep you entertained for hours as they swing from toy to toy screaming all the while. Napes have always had the reputation of being One person birds. I have found this to the case 75% of the time.

Our first bird was a Yellow Nape named Guillermo. He was definitely a ONE PERSON BIRD and would only come to myself. We spent so many months working with him so my husband Lee could at least return him to his cage without getting bit. Now Lee can do just about anything with him. 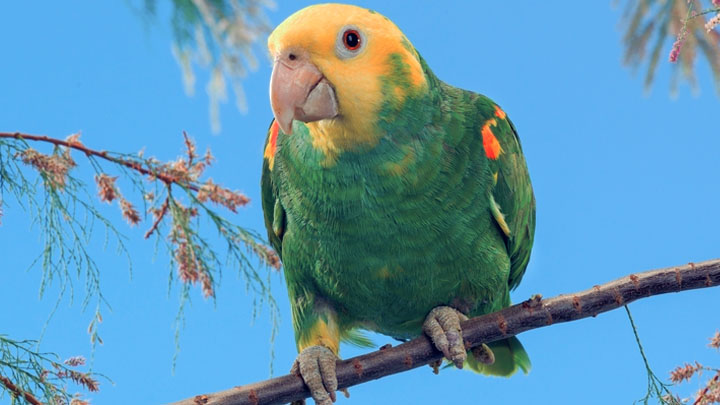 The Double Yellow Head has probably become the most common of the amazon as a pet. Their original habitat was Northern through Central Mexico which gave them the name Mexican Yellowhead. Unfortunately, their numbers (especially females) decreased in the '70s and '80s due to the smuggling of this species.

Since the borders are now watched more closely and breeders are becoming more successful with this species their numbers are increasing and are more readily available as Hand Fed Babies. The amount of yellow on the head is determined by the age of the bird. Unlike the Yellow Nape, the Double Yellow begins its yellow crown as it begins to feather out as a chick.

Usually by the time they are fully feathered the yellow will be about the size of a quarter on the top of the head. With each molt, the Yellow increase on the head and neck, around the eyes, and down the chain as the bird gets older.

They will also have red on the bend of the wing which can vary greatly from bird to bird. From our personal experience, we have found the Double Yellowhead just as good a talker as the Yellow Nape with the first word usually about 10 weeks. Usually, they will be friendly to numerous people and do not normally favor one person to another.

A 4-year-old female that we held back as a baby will go to anyone that is willing to hold her and even prefers strangers to us when we take her out. They are not as playful as the Nape but do have their favorite toys which they will play with for hours on end. 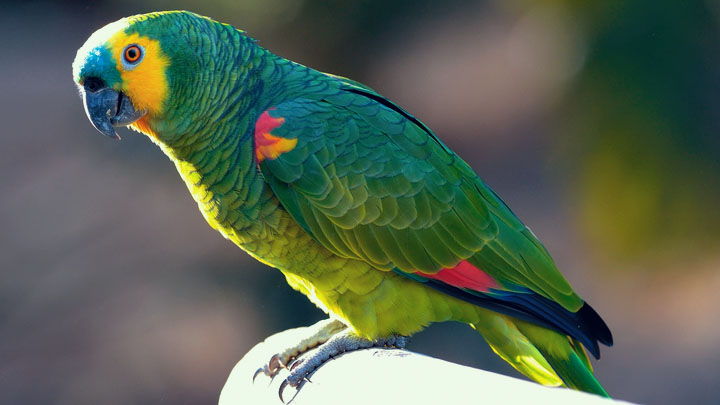 One of the few of the popular amazon not from Mexico is the Blue Front whose original habitat is South America. They are one of the most colorful on amazon. Coloring on the Blue Front can range greatly from each bird. We have even seen birds from the same parents look totally different with the amount of blue and yellow on their faces.

A lot of times the Blue Front will resemble the Double Yellowhead with the exception of a blue "Sweatband". Sometimes you will see some white directly behind the blue. They will also have Yellow and Red feathers on their shoulders which sometimes look like the yellow is bleeding. They are not as good of talkers as the Double Yellowhead or Yellow Nape, but can still carry on a decent conversation with you.

From our personal experience, the Blue Front is the tamest of amazon. We take ours quite a few places including business meetings and seminars. We can trust him 99% (No amazon can be trusted 100%) He will go to anyone and will put up with people sticking their fingers in his face saying "Does he bite?" To this date, he hasn't bitten anyone though he's been tempted many times.

We also tell people that if they want a tame, friendly bird and are not that concerned about talking, to look into a Blue Front and they won't be disappointed. Even though the last person we gave that advice to can't shut her bird up. She talks *all* the time. 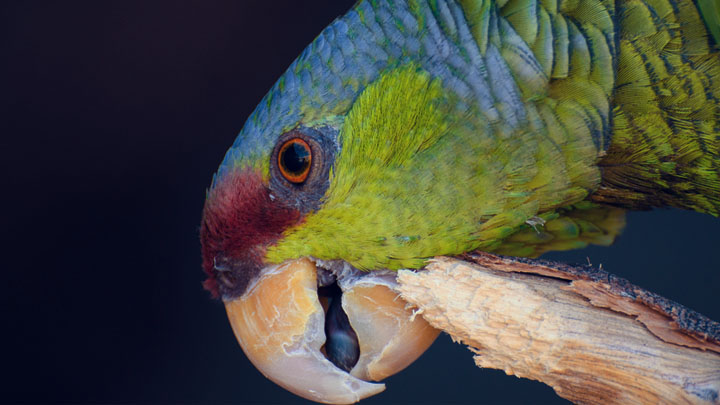 We were first introduced to this species when one flew down to visit with our Mexican Red Head while he was getting some sun on the Patio. They are about the same size as the Mexican Red Head (which is one of the smaller of the amazon) with a bit of darker green body than most amazon.

Their head is what makes them distinctive. The front of the head is a dark maroon with a lilac coloring directly behind. As the bird matures, the lilac becomes more intense and covers more area until it comes around the side of the face and meets under the chin. As a pet, the Lilac Crown makes the perfect family bird as they are always happy, playing, and chewing.

These species need lots of wood to chew on as it must have been a beaver in another life. We always tell people who have children and insist on owning an amazon to find a hand-fed Lilac Crown and it will be another child in the family.

There are quite a few more amazons that make great pets. The four I mentioned here are some that I am familiar with. I have known people who own Mealy, Green Cheek, White Fronted, and many other types and are very pleased with their feathered friends.

Amazon is a very special species. They have very distinctive personalities and should be watched when they reach the age of four when the breeding season kicks in. They can get a little testy, but patience and time will usually carry both of you through to the next year.

One more word of advice regarding amazon. Amazon is one of the most commonly smuggled birds and while the government is trying to stop this problem, some birds still sneak in. When you get ready to purchase your Amazon, know where it came from. Always make sure you purchase from a reputable shop or breeder. Don't buy a cheap one, buy a healthy and legal one.